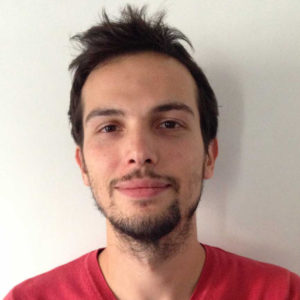 Particularly interested in digital media and graphic design, Alexandre Dechosal joined in 2007 École Supérieure d’Art et Design in Valence (Drôme), where he obtained a DNAT then a DNSEP. During five years of study, he focused his practice on the issues of screen graphics within ergonomic constraints. His research, also applied to everyday life, lead him to question the mobility of graphic interfaces. Alexandre joined EnsadLab in 2012, first in the EMeRI program and then in DiiP (now Reflective Interaction), in 2013. He took part in many events such as Surexposition where he designed the identity and the interface of the application. Since 2015 and still today, he continues to practice as an independent graphic designer and remains intimately linked to the project developed by Reflective Interaction: the MisB Kit interface, the identity and the user interface of Mobilizing-js, Discontrol Party #3, the identity and design of the site of Reflective Interaction, etc.