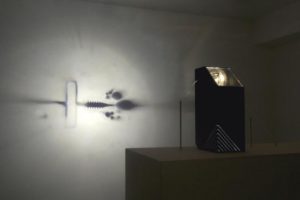 Trafic‘s ambition is to project the image of moving matter, as if it were a movie. A circuit containing a fluid, which channels are the size of a hair, appears in an optical projection system and its image is enlarged a hundred times. Non-miscible drops pass through these channels as data units in an analog continuum. Their shapes are perfect and their movement very regular because the fluid is laminar to these dimensions. Divisions or inclusions between the drops take place before our eyes, evoking in their regularity the visuals of early computer games. The continuous, endless flow of drops provides a digital image of the fluid. It is the particular design of the circuit in which they circulate that allows operations to be carried out on the drops, in a dynamic relationship between form and matter.

The device invented for the occasion, an “apodiscope”, allows the same object to be seen simultaneously on two separate scales. A kind of parallax vision, the observer’s change of position in space being replaced by a change of position on the scale of dimensions. It offers an off-centre vision, able to switch between a macroscopic subjectivity (that can be seen in very small) and a mesoscopic discovery (that can be seen at a larger scale, projected onto the wall). The liquid matter is totally controlled. The magnification system does not pass through any digital capture system. Unlike the binocular vision of a microscope which opens on the observed field at only two points, with very small dimensions, the enlarged image covers the spectator’s field of vision, whom is surrounded by it. 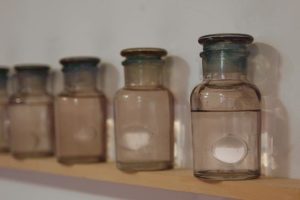 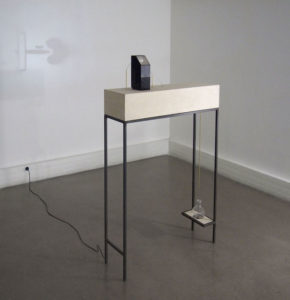